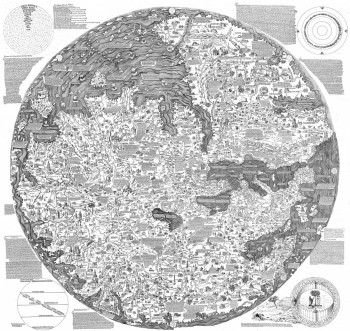 NB: This version of the map (PLAN 22/W)  will be completely water colored by hand.

The other version (PLAN 22/D) is "the only one" digitally reproduced in color from our entire collection.

This is the 2nd edition of the map who was made for the King  Alfonso V of Portugal. This edition was produced by Fra Mauro and his assistant Andrea Bianco, a sailor-cartographer. It was completed on 24 April 1459. The map was then sent to Lisbon in Portugal. Documents show that this map was housed in the royal palace of Sao Jorge Castle at least until 1494, but sometime after that the map disappeared.

The Fra' Mauro Map ."considered the greatest memorial of medieval cartography", is a map of the world made around 1450 by the Italian cartographer Fra' Mauro. It is a circular planisphere drawn on parchment and set in a wooden frame that measures over two by two meters. It includes Asia, the Indian Ocean, Africa, Europe and the Atlantic. It is oriented with south at the top.