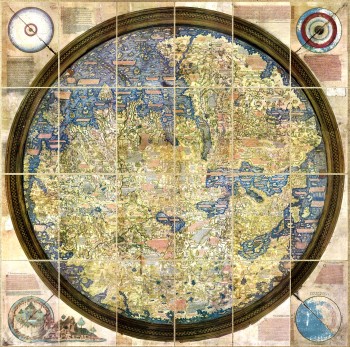 N.B. This map (PLAN 22/D) is  the ONLY ONE DIGITALLY REPRODUCED from our entire collection.

The Fra' Mauro Mappa mundi first edition, is undoubtedly "considered the greatest memorial of medieval cartography". it is a map of the world made around 1450 by the Italian cartographer Fra' Mauro. It is a circular planisphere drawn on parchment and set in a wooden frame that measures over two by two meters. It includes Asia, the Indian Ocean, Africa, Europe and the Atlantic. It is oriented with south at the top.

The map is usually on display at the  Museo Correr (museum) in Venice, Italy.